What is diabetic retinopathy

Eye being a sensory organ for vision comprising of three important layers that include the fibrous layer also known as the corneo-scleral layer which is the outermost layer of the eye made up of the cornea, sclera (the white part) and the limbus, as a whole they give shape and protection to the eye.

As we go inside we have the visceral layer also called the uveal layer made up of the choroid which provides nutrition to the eye, ciliary body which produces a fluid in the eye called aqueous humor and the iris which controls the amount of light entering the eye and then we have inner most covering of the eye called the nervous layer or the retina which receives the light and this is where the image is formed.

There is a small part of the retina called the macula which contains the highest number of light receptors and it is primarily responsible for central vision. There are various blood vessels which carry oxygen to the tissues. There are many nerves which carry signals to the brain and then bring back the orders from the brain to the eye. The main functions of the retina include:

When the body is working normally there is nothing to worry about but when there are various diseases processes going on in the body such as hypertension, diabetes, renal pathologies and liver diseases, then not only the primary organs are affected but there is a huge impact on other organs as well.

One of the major diseases that affects the eye and its normal functions is diabetes mellitus. Diabetes is one of the silent killers among all diseases worldwide and it can cause pathologies like Diabetic eye disease such as diabetic retinopathy. It is a non-inflammatory disease of the retina which occurs as a complication of Diabetes Mellitus. It is one of the important causes of blindness in adults aging from 20 to 60 years.

All over the world around 70-80 million people are affected by diabetes and the incidence of Diabetic Retinopathy depends upon the duration of the diabetes that for how long the person has it. There are 90% chances of having this retinopathy if a person has diabetes for 30 years and 15% incidence when a person has it for 5 years. The incidence increases by 10% with every 5 years pass by but it can rapidly occur when the risk factors are not controlled or not taken care of. Diabetic Retinopathy is common in type 1 diabetes as compared to type 2 but it can occur with both types. 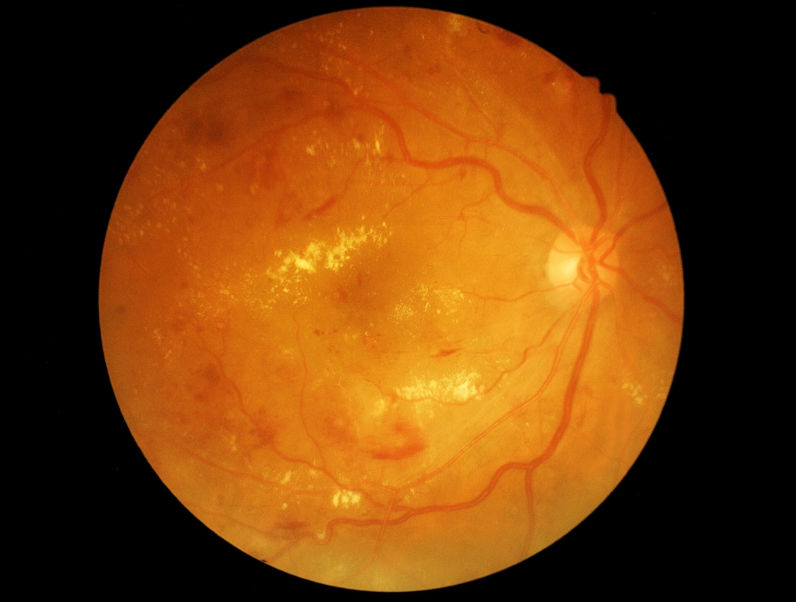 The risk factors that can speed up the progress of diabetic retinopathy includes:

Duration of Diabetes– If the disease stays for a long time there are more chances of developing Diabetic Retinopathy and of a severe nature as well because Diabetes is a progressing disease and if not in control it can easily involve the vessels of the eye.

Heredity– Diabetes has a strong genetic predisposition and it usually affects those who have a positive family history for diabetes.

Uncontrolled Diabetes– If sugar control stays within range, the chances of having diabetic retinopathy are less and when it is out of control than the incidence increases.

Obesity/Hyperlipidemia– It cause the deposition of fats in small arteries causing decreased blood flow to the eye resulting in retinopathy and they can increase the glucose levels.

Pregnancy/Anemia– Blood flow becomes turbulent in anemia and in pregnancy there is also anemia and the glucose levels are usually deranged, and this can also result in Diabetic Retinopathy.

How diabetes affects the eyes?

This is a disease which affects the micro vessels of the eye mainly affecting the tiny blood vessels in the retina. The risk factors contribute in causing damage to the endothelial cells which are the cells lining the lumen of blood vessels of the eye. Below the endothelial cell lies the basement membrane which becomes thick and fragmented, there is also loss of cells called pericytes which lie normally in the basement membrane and they are also lost in this disease. Due to these micro-vascular changes there is occlusion of these vessels, capillary leakage and bleeding leading to retinal hypoxia which means decreased oxygen supply to the retina and swelling of the retina occurs. In the end due to hypoxia (lack of oxygen) there is an abnormal connection which occurs between the arteries and veins and also new vessels start growing. This pathological activity which occurred as a complication of diabetes mellitus is called Diabetic Retinopathy.

The main symptom of diabetic retinopathy will be impairment of vision and depending on the severity of the disease other features include:

The stages of diabetic retinopathy are clinically detectable which are classified into:

How is diabetic retinopathy diagnosed?

Diabetic retinopathy is diagnosed by examination of the retina or the fundus by using various instruments and radiographic methods which are as follow:

Fundus examination – Which is done with a direct and indirect ophthalmoscope and also by the slit lamp.

Fundus fluorescein angiography– To evaluate for any leakage or occlusion in the blood vessels and retina.

Optical coherence tomography(OCT): It is useful in assessment of the swelling of the retina, retinal detachment etc.

There are various options to treat diabetic retinopathy depending on the severity and stage of the disease but are generalized as:

Medical– The first part in treatment of this disease is to control the risk factors.

Hypertension, anemia, obesity, nephropathy should be treated because they can cause the worsening of diabetic retinopathy.

Anti-VEGF therapy– Anti vascular endothelial growth factors can be used in macular edema (Swelling of the macula) and to stop neovascularization (growth of new blood vessels).

Intravitreal steroids– These are useful in reducing the macular edema as macula is the fine vision center where image is formed.

Laser treatment -Laser photocoagulation is used to burn the ischemic part (deoxygenated cells/tissues) of the retina and it stops the release of the growth factors and disrupts the formation of abnormal new blood vessels. It also helps destroy the leakage areas.

Surgical options– Such as pars plana vitrectomy in which the damaged parts of the retina are taken out.