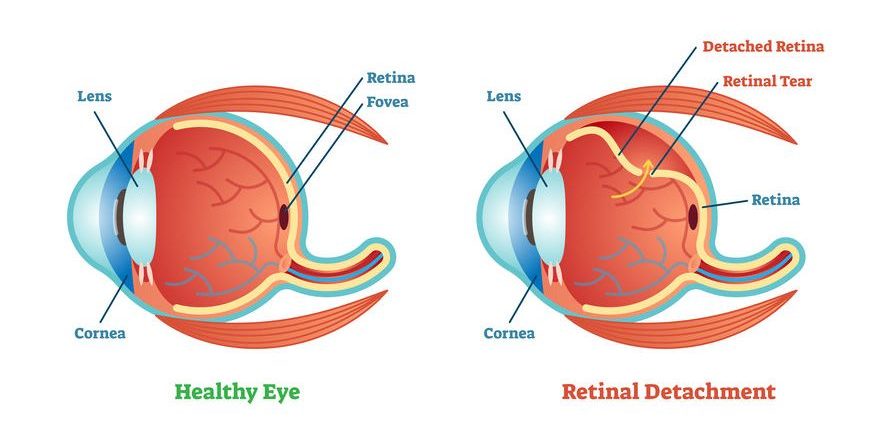 Retinal detachment is an eye problem that happens when your retina (a light-sensitive layer of tissue in the back of your eye where images are formed in the eye) is pulled away from its normal position at the back of your eye.  The retina is a thin layer of nerve cells at the back of the eye, which are light sensitive. We need to have a healthy retina so we can see clearly. The retina of eyes is attached to the tissues which lie under the eye and the separation of these tissues from the eye is known as retinal detachment.

Symptoms include an increase in floaters, light flashes and a worsening of the visual field’s outer portion. This may be described as a covering over a part of the field of vision. In about 7% of cases, both eyes are usually affected. Without treatment, permanent loss of vision may occur.

People with extreme myopia, diabetes, patients with difficult cataract surgery, and those with a blow to the eye are all more vulnerable to this disease.

The common causes of this situation are the breakage of the retina or the tearing of it. Retina breakage may be caused by retinal detachment from the vitreous gel.

If the retina tears, getting into the back of the retina gives way to the vitreous gel. It is this layer of accumulated gel which causes the eye to detach from the retina. When the gel is more and more concentrated and deposited behind the retina, the detachment increases, and the entire retina becomes removed in some cases. This happens when the tear is very big. The retinal detachment is most prominent in a single eye. It does not affect both eyes. Even the other eye is thoroughly checked for any signs of tears or breaks within the retina when such an incident occurs. This is done to protect the second eye, in order to take preventive measures.

In this operation, at the spot of a retinal tear, a surgeon applies a slice of silicone or a sponge to the white of the eye. The buckle is constructed by moving the sclera toward the retinal tear or split to restore retinal detachment.

Pneumatic retinopexy is done in an office setting. Your eye doctor will infuse your eye with an expanding gas bubble. He or she will position you so that the bubble floats over the detached area and pushes it against the back of your eye. Your eye doctor then uses a freezing apparatus to seal the retina against the eyewall.